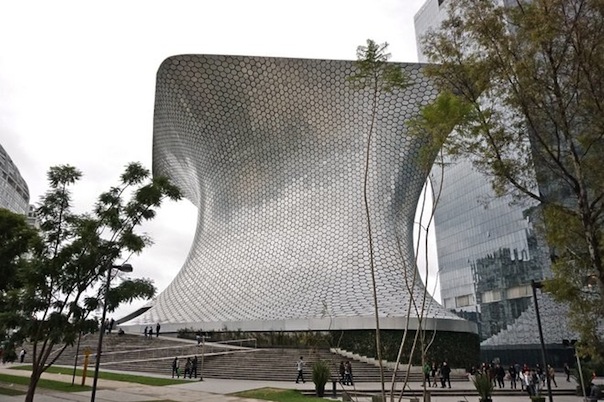 Fresh back from the holidays and my first trip of the new year, I’ve started contributing to Oyster.com and published my first piece just before the new year. It’s on Mexico City and about things you should know about the city that you might’ve not before. I was very surprised by Mexico City, especially by how massive it was and how many things there was to do there. Below are a few things I liked while I was there pulled from my article:

1. Mexico City has over 350 museums and art galleries

Mexico City has a colorful mix of museums and art galleries throughout the city. Of course you can find Frida Kahlo’s vibrant works in the iconic blue-home-turned-museum she once shared with Diego Rivera, but there are over 350 other museums and art galleries to visit. Ranging from the architectural wonder of Museo Soumaya (pictured above – houses works from Dali, Rodin, Monet and more — and is free to visit), to quirky finds at the Museo del Juguete (a vast toy museum of over 20,000 toys and Mexico childhood nostalgia), you can find a museum dedicated to just about anything. There’s even a museum honoring the greatest substance on earth — chocolate, of course — over at MUCHO Mundo Chocolate.

Mexican food goes far beyond tacos, guacamole, and insects. Delicious Mexican cuisine was officially named a “World Heritage” by UNESCO in 2010, and the gastronomy options in the city just keep getting better — with Mexico City being home to food from all over the world. From Japanese and Indian cuisine to food from Spain and Peru, you can find it all in Mexico City.

Mexico has among the world’s highest number of edible insects, and locals make use of them in everything from appetizers to dessert. Both high in protein and an organic option, start off with escamoles (ant larvae) — which resemble a nutty risotto —  to ease into creepy-crawler dining. Then you can move onto other more obvious-looking bugs such as beetles, crickets, scorpions, and dragonflies. Make sure to visit Restaurante Limosneros for beautifully presented and tasty insect dishes and other Mexican cuisine.

Over 20 million people live in Greater Mexico City, which is more than twice as big as New York City. While this makes road congestion rough, it’s easy enough to walk around several different neighborhoods in a day, and it doesn’t feel too crowded. If you are thinking of relocating outside the states and you fall for Mexico City after you visit, you won’t be the only American in the city, either. Mexico City is home to the largest concentration of Americans living outside of the U.S., with over 700,000 expats.

5. You don’t have to spend a single peso to explore the city

There’s a ton of free things to do in Mexico City. A couple include visiting the Angel of Independence (the city symbol, which you can climb up 12 levels for great views from the top), walking around the colorful Coyoacan neighborhood (which boasts delightful cobbled streets, shaded squares, and quaint colonial homes) and perusing the historic center (which features a mix of opulent architecture throughout the area). Most of the museums are also free on Sundays (for those that aren’t free year-round) such as the Palacio de Bellas Artes (pictured above).

See more things you might’ve not known about Mexico City on Oyster.com

Travel Around the World for a Year With Intrepid Travel