Where To Stay In Provincetown

Everyone should visit Provincetown, Massachusetts at least once, especially if you’re looking for a gay getaway in the north east coast that is not New York City nor Fire Island. I first visited a year ago during Memorial Day weekend, which wasn’t as crowded as during Independence Day weekend or the annual Carnival events (both great times to visit). Once you pick out when you want to visit P’town, you need to figure how to get there (and I already have a guide for that here) and where to stay. Lodging options range from seasonal guest houses to year-round hotels and resorts. Keep in mind the following when booking a stay (based on my article for Passport): 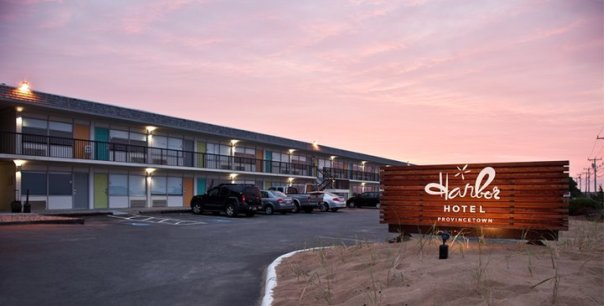 Harbor Hotel Provincetown
Located at the end of Commercial (the main street in town) on the quieter and artful east side of P’town, the Harbor Hotel offers 129 modern guest rooms and suites decked out in green and turquoise. Amenities of this pet-friendly hotel include free Wi-Fi throughout the structure, parking on-site, and  a fire-pit (above) out in the front overlooking the sea. The hotel also offers a seasonal outdoor pool with Cabana Bar where several different cocktails and grill options are available. Inside the hotel’s lobby, you’ll find a complimentary deluxe continental breakfast (seasonal), an all-day coffee bar and the popular Whaler Lounge for more eats. 698 Commercial St. Tel: 508-487-1711. www.harborhotelptown.com