If you’re a New York City gay in his 20s-30s, you either know of or have met nightlife promoter Justin Luke at one of his weekly parties across Manhattan. And if you are a traveler to the city, odds are you’ve been to at least one of them in your last visit during a night out.

Just getting his start four and half years ago at the soon-to-be closed Splash, Justin is the co-director and head promoter of longtime NYC gay nightlife promotion company, BoiParty.  Justin is also a published author, a fellow blogger, and has a knack for social media; creating a private VIP Facebook group of over 7,700 international gay men in their 20s, Gorgeous Gay and Twenty-Something (GG20).

Kicking off this new series, Justin gives us his favorites and musts for the ever growing gay hub of Hell’s Kitchen; where he resides and the hottest parties take place.

Schmackary’s – Justin’s sweet tooth go-to is the gay owned Schmackary’s: “Completely not healthy. Absolutely delicious! The Maple Bacon cookie is the death of me, and their shakes are equally deadly.”

An Outdoor Space To See:

“There’s an amazing garden on 48th between 9th and 10th [the Clinton Community Garden]. But you need to apply to get a key, or you have to wait for public hours!”

“The New World Plaza between 49th and 50th and 8th and 9th. You’ve got two restaurants with ample outdoor seating and amazing frozen cosmos (Mother Burger and Blockheads). Plus tons of sunbathing gays.”

While not a big shopper himself, Justin recommends TAGG and Universal Gear as the “mainstays” for gays. “I usually go to Fifth Avenue for Best Buy and Barnes & Noble,” he added,”because I’m a nerd.”

For A Quick Drink Go To:

“Boxers Hell’s Kitchen – bright, new, and the bartenders are quick! Plus, sports on ten million TVs if you dig that sorta thing.” Justin also shared his drink of choice, which is the same wherever he goes: “Absolut Citron with soda and a splash of cran – It matches my glasses!”

Justin provides his picks for where to go out each night of the week. His biggest parties of the week include Q Thursdays, Penthaus Fridays and VIVA Saturdays, and you can find them at all three each night.

Justin shared his pick for a hidden gem in Hell’s Kitchen nightlife, which he says is the weekly programming at the Time Out New York Lounge at New World Stages—calling it “amazing”.

Even with all different parties to choose from, Justin says Friday is his favorite night of the week for Penthaus (recently named the hottest NYC party by Logo) and its “breathtaking” views when the roof opens. 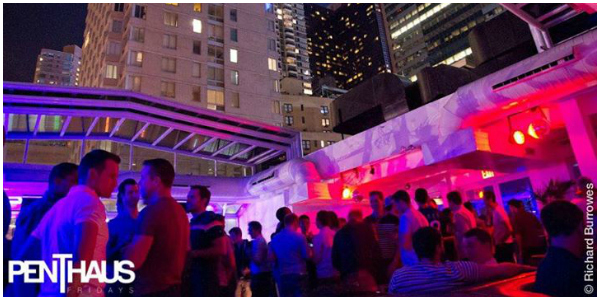 Photo via Facebook: Penthaus at Copa with rooftop open