The LIGHT club opens up this month and marks the third nightlife venture for Cirque Du Soleil in Las Vegas.

Get turned on by the latest installment from Cirque Du Soleil, LIGHT. The upcoming nightclub at the Mandalay Bay in Las Vegas will bring together sound and art for club goers to experience in a way that does not involve sitting in a theater. While it is not a gay club, all of Cirque Du Soleil properties are gay friendly (and there is even a thriving gay night at one of them), and LIGHT will surely be one to check out during a night in Sin City after it opens Memorial Day Weekend.

Look Towards the LIGHT 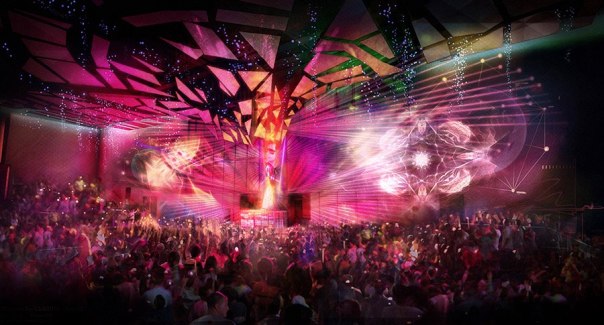 Designed to play with your senses, LIGHT will merge the world-renowned creativity and theatrics with high-tech production and internationally acclaimed DJs and performers to “redefine a night out.” Upon arrival, guests are expected to enter the realm of the unknown, as everyone will be part of the “show”. The DJs will be aided by exclusive performance elements and visuals provided by costumes and unique choreography, video mapping, lighting, sound, and special effects experts Moment Factory, which has provided effects for more than 300 events, shows and installations for the likes of Cirque du Soleil, Disney, Nine Inch Nails, Céline Dion, and Madonna—to name just a few.

While the Canadian entertainment group is still keeping more details under wraps, even with just weeks from opening, various concept art has been released (above) and the list of the DJs to expect was revealed—with opening weekend featuring both Nicky Romero and Axwell. Cirque du Soleil founder Guy Laliberté said in statement, “The nightclub will serve as a laboratory, very much like our special events and projects have done in the past, for different and new artistic possibilities.”

LIGHT will be the first full nightclub to be brought on by Cirque Du Soleil, but it is not the first or only venture in nightlife. In Las Vegas there are two other locations to experience Cirque Du Soleil with bars and dancing. 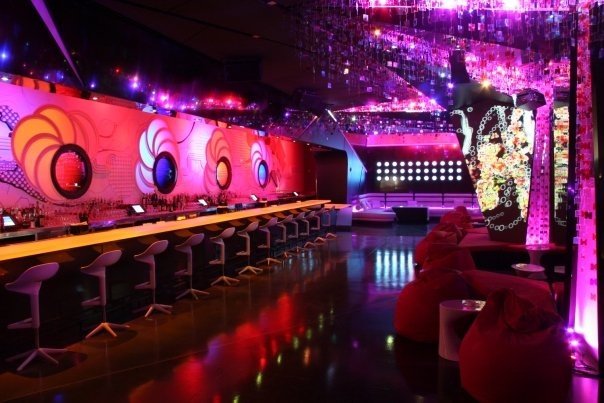 Party like Paul McCartney and the boys at the retro chic Beatles Revolution Lounge (pictured above) in the glamorous Mirage Resort. Cirque du Soleil takes the allure of the ’60s, visible with polished white cocktail tables, chairs and a shiny bar, and updates it with the technology of today. Psychedelic light projections emulate purple, pink and blue toned effects that bounce off the white walls and metallic bar stools and ceiling. The lounge is a really mind boggling, especially after a certain number of drinks. When the music hits you, you can move over behind the bar columns on top the small dance floor where the DJ pumps music from today top 40—at least it was top 40 during the lounge’s weekly LGBT night, which has been called the best night to attend during an average week. Hopefully a new LGBT night will emerge at the LIGHT.

The Beatles Revolution Lounge was Cirque du Soleil‘s first nightlife venture. After a couple of years, Cirque did it again with The GOLD Lounge (pictured above). Taking in consideration the name, the GOLD lounge had to be ultra chic. Located at the Aria Resort, GOLD boosts modern decor that consists of both eclectic and elegant design patterns, with black and gold color palettes. The lounge is also meant to take you a decade before the Beatles to the 1950s, and does so with its one long and sleek bar. Seats, in leather and suede, are in clusters and meant to stimulate conversation and promote interaction among visitors—giving the lounge a cigar bar feel, minus the smoke.

All of Cirque Du Soleil‘s nightlife locations in Vegas have been brought on through its partnership with The Light Group, a hospitably group that also partnered for five other lounges and nightclubs in Vegas and a total of 25 venues worldwide. The name of the new LIGHT nightclub is also a great testament to the group and Cirque Du Soleil‘s union over the years. The Light Group founder Andrew Sasson said in statement, “This partnership and the projects we are working on will be unlike anything the world has ever seen before. … Cirque du Soleil has built a brand with worldwide recognition and their creativity, attention to detail and passion for their work perfectly complement The Light Group and everything we stand for.”

The LIGHT nightclub is set to open on May 24.