Lyrical enchantress Sky Ferreira is set to release her much anticipated debut album I’m Not Alright this year. However with no new official date yet on its released—let’s hope not pushed back once again—Sky released her  is releasing her third EP Everything Is Embarrassing on March 23.

I first started listening to Sky when her single “Obsession” became popular from the TV show The Vampire Diaries‘  soundtrack in 2010. I immediately fell in love with “Obsession” for its electropop anthem, with emphasis on the pop. It was like Goldfrapp’s “Oh La La” met Nelly Furtado’s “Say It Right,” and boy did Sky certainly sing it right! 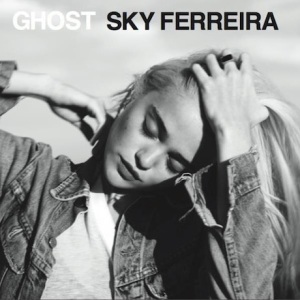 Fast forward to the present, her second EP Ghost was released in the fall 2012 and it is a must listen! She’s grown to a mix of folkpop, indie, and alternative-rock sound that was unexpected. Ghost is loaded with five diverse tracks: “Lost In My Bedroom,” “Sad Dream,” “Ghost,” “Red Lips,” and “Everything is Embarrassing.”

“Lost in My Bedroom” is a great evolution from “Obsession” with a low tempo electropop sound, but with lyrics of an indie vibe—providing a great middle transition for the rest of the tracks on the album.

My personal two favorites are “Red Lips,” which was co-writtern by Garbage‘s leading lady and gay rights supporter Shirley Manson. Very alternative rock and Garbage sounding, it was first track released to show off Sky’s new sound. Renowned edgy and controversial photographer Terry Richardson was brought in to shoot the video, and be warned, it is not for someone with arachnophobia—hint!

Title song “Ghost” is another favorite for Sky’s emotional, raw and soft indie folkpop, that somewhat reminds me of Transister’s “Flow” from the ’90s—which you remember from the guilty pleasure film Jawbreaker.

Posted on February 18, 2013, in Entertainment, Music and tagged entertainment, music. Bookmark the permalink. Leave a comment.